Telos’ Decentralization Rivals that of Bitcoin and Ethereum 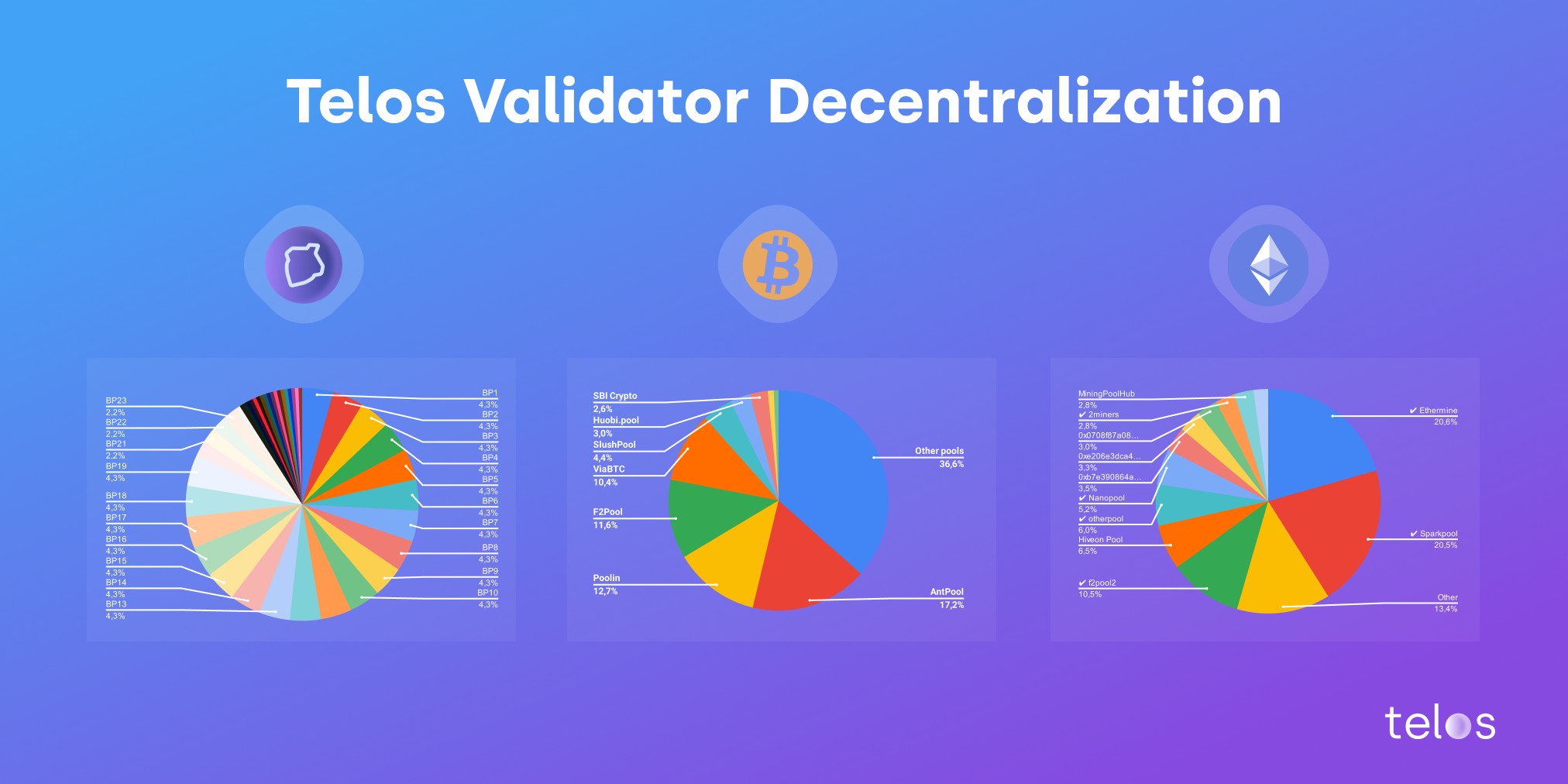 As mining pools lack equality, massive node counts become irrelevant: As depicted in the pie charts above, Telos, via its governance, has maintained an equitable distribution amongst all its active validators and Bitcoin and Ethereum have not. Instead, the mining pools of both Bitcoin and Ethereum have now become centralized. The hypothesis is that over the years the well-funded pools have overtaken the little ones. Despite the substantial number of nodes, to be a credibly neutral peer-to-peer network, the network must also sustain even splits in validator power / responsibilities. Without this equality, the insulating strengths of decentralized peer-to-peer networking becomes significantly degraded. A decentralized network made up of equitable validators adds a powerful layer of insulation against multiple scenarios. For example, a multi-government coalition could potentially implement disruptive regulations or restrictions on blockchain. If only a handful of validators / mining pools need to be targeted, it becomes much easier for those governments to impose their will and degrade the insulation that a peer-to-peer network is supposed to provide. In fact, an event far smaller than this could instantly interrupt some chains from operating as they intended. However, the problem is not just limited to government interference. It is also the potential of a coalition amongst the validator majority that threatens the decentralization and stability of a chain. Despite having many nodes, it appears that for Bitcoin it would take only ~5 large mining pools to form a majority, only ~4 for Ethereum and 22 for Telos (as depicted in the pie charts above). Aside from this significant (4x to 5x) difference, it is also worth noting that the community fairly votes the Telos validators into active slots vs Bitcoin / Ethereum in which the mining pool’s principles are anonymous and can simply buy their way into a majority position. Hence, the centralization and lack of credible neutrality that has now formed. Credible neutrality cannot exist in an environment in which control and influence is exerted by small groups of well-funded people. This move towards validator centralization also leads to neutrality questions that are impossible to answer. For example, are the validator majorities’ ambitions in line with what is best for the chain or themselves? To put the potential gravity of this into perspective one needs to understand that the principal/s of a majority sized mining pool can easily be a crime syndicate, and no one would know about it due to the anonymity. In fact, all the major mining pools can hypothetically be owned by crime syndicates, and no one would ever know. In contrast to this, with chain-governed validator equality and ongoing fair community voting, these credibility and neutrality questions are simply non-existing issues. In fact, all these chain degrading scenarios are exactly what the Telos architecture and governance have insulated against. As a chain’s validator network becomes unequal in size; the more it will move towards centralization, the more its neutrality will become biased and the more these chain breakdown scenarios may become a reality.

Insider allocation cost blockchain’s their credible neutrality: Being that Telos was a 100% bootstrap project (95% of the coins airdropped to the community, 5% were used as equal pay to the almost 150 contributors, no insider handouts, and no ICO), the team already knew that its insider allocation was at the same level as Bitcoin’s beginnings, zero. Telos is the only L1 chain besides Bitcoin to have ever reached this stage of maturity while still maintaining zero insider allocation. All the other L1 chains are believed to be centralized and unable to become credibly neutral public infrastructure due to their insider allocation (click here to see). With this being noted, these chains will most likely never be utilized by governments as a legal tender and dApps depending on this infrastructure will never be 100% insulated by the full power of credible neutrality and decentralization.

Telos Decentralization: Since its inception, the validators of the Telos Blockchain are both equally sized and regionally / globally diversified. Plus, no ungoverned wallet is known to hold more than 2% of the chain. From chain architecture to finances, decentralization and neutrality are of the highest priority for the chain. Over the last 4 years, Telos has grown into a truly utopian blockchain option for both private and public infrastructure. It is ludicrously fast, very inexpensive, extremely energy efficient, credibly neutral, non-congested, super easy to deploy on and the only chain that fully insulates the public from the front running / MEV that is plaguing Ethereum.

The actions and inactions of Telos are driven by the belief that the public and private sectors require credibly neutral blockchain infrastructure in a third-generation capable format. Credible neutrality, ludicrously fast speeds, energy efficiency, and super low-cost transactions make Telos the perfect crypto currency for the global internet and for the people.

Live since 2018, Telos Blockchain (ticker: Tlos) is a third-generation smart contract platform that offers compatibility with Solidity, Vyper and Native C++ smart contracts. Telos provides full EVM/Solidity support with fixed low-cost gas fees and no front running. Uniquely, Telos also offers a path to fee-less transactions via its robust native C++ smart contract support. Utilizing less than 0.000002 kWh per transaction, the chain can sustainably support hundreds of millions of transactions per day, produce blocks in 0.5 second intervals on a first-in-first-out basis (eliminating front running on the network) and securely validate transactions via a credibly neutral and globally decentralized block producer network. The Telos Blockchain has the throughput needed to facilitate and scale the thriving Metaverse / Web 3.0 better than any other blockchain. Its performance is unrivaled in the industry and was purpose-built to offer speed, scalability, cost-effectiveness, credible decentralization, and end-user fairness. Telos, harnesses its power by utilizing tight C++ on the frontend and a custom WASM runtime environment on the backend.

The Telos Foundation is a Decentralized Autonomous Organization established as a promotional and funding body to advance the Telos Blockchain Network and provide support to network applications.